The Wisconsin Alumni Research Foundation (WARF) is seeking commercial partners interested in developing an automated system that uses liquid crystals to sensitively detect biomolecules, such as DNA, proteins and peptides.
Overview
Liquid crystals provide a means of detecting the presence of target molecules, such as peptides and proteins, on surfaces.  Current methods work by detecting a change in the orientation of liquid crystals in the presence or absence of the target analyte. However, these methods largely are qualitative.

The Invention
UW-Madison researchers now have developed an automated system for precisely determining the in-plane orientation of liquid crystals with high spatial resolution to sensitively and quantitatively detect biomolecules.  This system, which allows variations in the anchoring strength of liquid crystals to be measured easily, consists of a modified liquid crystal cell and an automated image recording and analysis system.

Then a series of images are acquired of the liquid crystal film that contacts the surface to be analyzed.  The images are analyzed to yield maps of the twist angle and thus anchoring energy of the liquid crystal across the surface.  This technique effectively condenses a large data set of images into a compact map to reveal features on the analytic surface that were not apparent in the individual images.
Applications
Key Benefits
Additional Information
Related Technologies
Tech Fields
For current licensing status, please contact Jennifer Gottwald at [javascript protected email address] or 608-960-9854
Figures 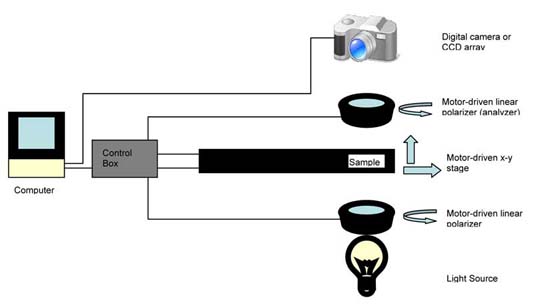