The Wisconsin Alumni Research Foundation (WARF) is seeking commercial partners interested in developing a new technique for creating and transferring chemical and physical nanoscale patterns using self-assembling block copolymers.
Overview
The development of nanoscale components is becoming increasingly important as complex electromechanical, chemical and biological nanodevices are engineered to fulfill specific responsibilities in industry and progressively integrated into consumer products.  Size reduction in semiconductor technologies, for example, has spawned investigation of advanced photolithography techniques to etch complex circuits onto silicon wafers.  However, each type of radiation possesses a characteristic wavelength, which ultimately limits the resolution of conventional photolithographic techniques.

Due to wavelength limitations, even advanced lithographic techniques such as deep ultraviolet or liquid immersion are not able to attain resolution below about 30 nanometers.  Other approaches like electron or ion beam lithography are uneconomical for several reasons, including long etching times or energy requirements, and therefore are utilized mainly in lithographic mask fabrication.  The ability to easily create patterns smaller than is possible using modern photolithographic methods, on the scale of tens of nanometers and below, will facilitate commercial manufacture of nanodevices and promote their integration into industry as well as the consumer marketplace.

The Invention
UW-Madison researchers now have developed an improved method of creating and transferring chemical or physical nanoscale patterns using block copolymers.  This method builds upon the researchers’ previous inventions by controlling the chemistry of the copolymer pattern to facilitate reactions that lead to transferring of the chemical or physical patterns.   The copolymers used in such an approach comprise two or more constituent units engineered to exhibit distinct chemical properties based on blocking of monomer units and branching thereof.  Different chemical properties among monomer units establish micro-phase separation at the polymer surface and allow ink or transfer molecules to be sequestered into specific copolymer blocks to generate distinct patterns.  The ink molecules are designed to interact with a second substrate, commonly by raising the temperature just above the glass transition temperature, to facilitate mass transfer of the ink and reproduce the copolymer template pattern.

Traditional lithography techniques can be incorporated into the new method, creating the master template to which the copolymers are adhered.  The master template also can be fabricated via chemically nanopatterned surface techniques.  The master template is regenerated after each use, but also may be replicated given specific inks that facilitate the bonding of a new copolymer surface after initial copying.  This method can be used to rapidly and easily generate chemical or physical patterns to be employed in all fields of nanotechnology, such as manufacture of integrated circuits.
Applications
Key Benefits
Publications
Tech Fields
For current licensing status, please contact Emily Bauer at [javascript protected email address] or 608-960-9842
Figures 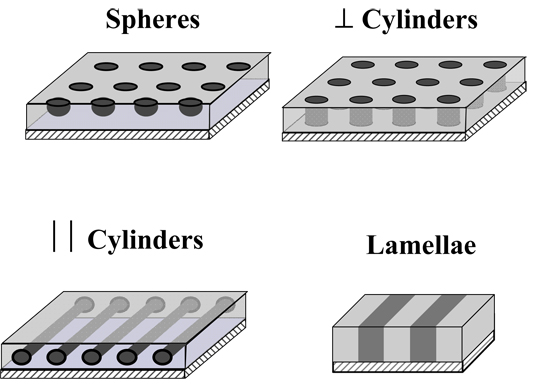