THE DISCOVERY THAT INSPIRED A FOUNDATION

The Wisconsin Alumni Research Foundation (WARF) was established by an enterprising university scientist in need of an innovative solution. 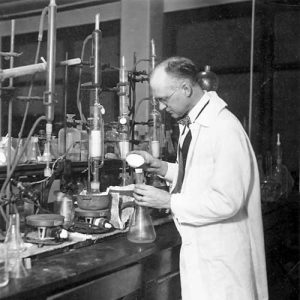 Harry Steenbock, professor of biochemistry at the University of Wisconsin, had just made his breakthrough discovery that certain fats could be fortified with vitamin D when exposed to ultraviolet light. He knew his invention had a great potential public health impact.

Steenbock filed for a patent on his own because at the time most universities weren’t managing patents, and the ones that tried had not found much commercial success. Shortly after receiving his patent, he also received a lucrative commercial offer for his invention. Hesitant to simply sell for profit, Steenbock wanted to ensure that the proceeds would go back to support the university. Without knowing how to do this successfully, the resourceful scientist turned to Harry L. Russell, Dean of the College of Agriculture, and Charles S. Slichter, Dean of the Graduate School, for help.

Together, they conceived an independent, nonprofit corporation run by alumni trustees that would manage the university’s patented technologies and invest the revenue to support future university research. They hoped to design an organization that would keep Wisconsin at the forefront of industry and research.

Drawing on this inspiration, the alumni founders decided their mission should run deeper than simply patenting and licensing university technologies. WARF’s original articles of organization, filed with the Wisconsin Secretary of State on November 14, 1925, declared that “the business and purpose of the corporation shall be to promote, encourage and aid scientific investigation and research at the University of Wisconsin by faculty, staff, alumni and students thereof, and those associated therewith.”

WARF licenses to companies and entrepreneurs with the resources to bring your invention to the world. We’re here to help your hard work and innovative research make a difference.

Almost 100 years later, that original mission is still the driving force of the foundation. After commercializing Steenbock’s invention, WARF has gone on to support generations of university scientists and built a strong investment portfolio designed to support Wisconsin research for the next century and beyond.