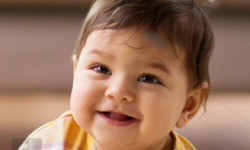 This year the world’s attention has been seized by crisis. But a gene therapy to restore sight to the most vulnerable is advancing towards clinical trial, championed by a University of Wisconsin researcher and a Navy SEAL-turned entrepreneur. With a plan to bring a therapeutic for curing blindness in certain pediatric patients in less than 30 months…

To suffer from an ultra-rare disorder means, almost by definition, to suffer alone.

And LCA-16 is an exceptionally rare disorder, so recently discovered that a test has only been available for the last two years. A form of inherited pediatric blindness, an afflicted child will most likely be clinically blind by the age of ten.

Dr. Bikash Pattnaik knows each of their names.

“If anyone could work on this [disease] for a solution at a molecular level, it was me, so I jumped at this opportunity,” he says.

Dr. Pattnaik is a professor in the departments of pediatrics, ophthalmology and visual science at the University of Wisconsin-Madison. He is a physiologist by training with a special interest in blindness due to defective ion channels (or channelopathy).

On a cold spring day in Madison, Dr. Pattnaik is visiting the Wisconsin Alumni Research Foundation, one of the world’s original tech transfer offices, chartered with moving discoveries to market. More often than not, that means surfacing people outside of academia willing to bet on young technology and win capital for projects they believe in.

Sabados, gracious and intense, describes himself as a selfless leader “with the sickness” to be an entrepreneur. He has co-founded three previous companies and serves as an advisor to several more including two biotech companies developing drugs for PTSD and COVID-19. His chops include six deployments – including time spent in Afghanistan and leading operations off the coast of Somalia – as well as Harvard University and MIT.

Sabados and Pattnaik seem an unlikely pair, but the synergy works.

“Getting to know Bikash, getting to understand his research and his humility and his passion for the patient, I told myself I couldn’t stop,” says Sabados. “This is what I wanted to do.”

The innovation that has brought this group together is a potential first-in-class gene therapy to halt retinal degeneration and restore vision to the handful of LCA-16 patients known to science, with some promising applications in other retinal disorders that impact millions of people worldwide.

Pattnaik explains that LCA (or Leber’s congenital amaurosis) is a family of disorders all caused by different gene mutations. While a few major pharma companies – Allergen/Editas and Roche – have developed or are developing therapies for other, more common forms of the disease, LCA-16 currently has no approved therapies.

He explains that this particular form of the disease is caused by mutations in a gene called KCNJ13, causing dysfunction of an ion channel and thus degrading the ability of photoreceptor cells to encode visual stimuli. LCA-16 is so rare – only affecting individuals of Middle Eastern descent – that the mutations may have originated from a single family line.

In simplified terms, Pattnaik wants to use a viral vector to deliver healthy copies of the gene via injection deep in the eye. In a proof-of-concept study, he showed that this ‘gene augmentation’ approach can rescue ion channel function in retinal pigment epithelial (RPE) cells derived from the stem cells of affected individuals.

It has worked in diseased mice. He is confident it will work in patients.

Sabados is confident too. If everything goes well they plan to begin treating patients next summer, potentially curing their blindness within a matter of weeks. Admittedly, raising venture capital during the COVID-19 crisis has been no small feat. But the company Sabados founded to move this project forward is called Hubble Therapeutics – a homage to the aspirational.

Despite the pandemic, “the impetus and the struggle and the sense of urgency around biotech” has never been greater, he says. The humanitarian significance of the LCA-16 project is manifest. But key to incentivizing it is an FDA program Sabados calls “one of the best acts of legislation Congress has done.”

To encourage life science companies to develop therapies for very small patient populations, the FDA can award a voucher promising accelerated (versus “standard”) drug product review. Such companies can sell these vouchers, or golden tickets, to other companies keen on moving their own drug to market faster.

In the world of big pharma, getting a blockbuster drug into the market six months early can yield enormous additional profit. So much so that FDA vouchers have been bartered between companies for hundreds of millions of dollars.

But perhaps most importantly, Pattnaik believes that news of the treatment for LCA-16 may percolate through communities throughout the world, inspiring untold others to seek treatment for a disease they assumed was hopeless.

“That’s the most important goal,” he says. “To reach out to a broader mass so that people are aware that this [disease] is now worked out, and we do have a treatment developed.”

For Sabados there is also a lesson in this story about humility, passion and the essence of basic research.

“Early stage university research is able to look outside the box at next-generation therapeutic solutions. If you look at our biotech industry, which will literally save the world, a lot of the transformational companies developing life-saving therapeutics today came from a university research team with a lab bench.

“Universities are the solution… and the University of Wisconsin is one of the best.”