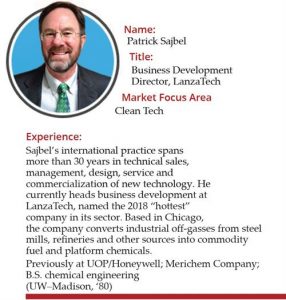 A new addition to the Accelerator Program, Patrick Sajbel grew up in Wisconsin paper country. Now he stands on the cusp of the bioeconomy.

WARF: At its core your company is looking to ancient life to solve a modern challenge.

PS: LanzaTech’s process uses microbes (acetogens) that grow on gases rather than sugars, as in traditional fermentation. The process is one of the oldest biological reactions on earth—predating cyanobacteria or algae. Ethanol is produced naturally as a part of this process.

Emissions from many industries, including steel manufacturing, are very similar to the gases these microbes grow on in extreme environments like hydrothermal vents in nature.

W: Is that why the company is viewed as so novel?

PS: That is one of the reasons. The reactor technology is also novel. The production platform of different types of chemicals beyond ethanol is the area that really differentiates.

We’ll have the first commercial unit on stream in China this year. With startups there is high risk, high reward and it’s a good time to do it. How will it end up? The first thing is to show it – and de-risk it – commercially, and that is where the focus is right now.

W: Not all startups feature Sir Richard Branson [founder of Virgin Atlantic airline] on their website.

PS: Since 2011, Virgin Atlantic has collaborated with LanzaTech and they are committed to pioneering a low carbon aviation future by becoming the first airline to use LanzaTech fuel on commercial flights. Something we’ve done at the pilot/demo level is synthetic jet fuel. It is a long time in development because the standards are extremely rigorous. You don’t want something to go wrong with jet fuel – to freeze or evaporate in flight.

And what about the economics? Air traffic is projected to take off exponentially. You can have an electric car but you can’t make an electric airplane. You still need liquid fuel and low-carbon production will become critical.

W: How do you make the sell to established industries to modify their processes?

PS: It’s a good value-add because you are making a liquid product from a waste gas that is usually burned, sending CO2 out a stack. But you have to create a cross-industry kind of marriage between older industries – steel mills, refineries, other point sources – and a biological process of fermentation.

I’m dealing with people who are experts in their area but they know very little about what I’m doing, so I have to bring them up from zero to 60 pretty fast. And, conversely, I have to listen very carefully to what they say. It’s an interesting exercise in communication.

W: What resonates about the Accelerator Program?

PS: It’s about giving back. Technology delivery is what I’ve done for my career and this is one of the steps in that. It’s just a perfect fit from the standpoint of being able to interact with innovative researchers and set courses to implementation. And I love Madison.

W: What’s the best part of the program?

PS: Interacting across disciplines is a lot of fun.

W: You’ve worked in energy for decades. What’s the future of your field?

PS: Greener. When I was a student, people said if only solar or wind was a little cheaper it would have a greater share of the total energy pool. Economics are now favoring these renewables and the carbon issues are also really forcing that. There is a lot more energy from fossil fuel now, but in the long term that will change. It is a question of how fast.

W: Do policymakers get it?

PS: The pendulum swings. The other day I was on the phone to Abu Dhabi. They realize that the oil economy isn’t going to last forever. There are projections for peak demand, and what do they do after that? So there are plans to expand and send out finished products rather than crude oil, and lowering carbon footprint with renewables.

W: Your work has taken you around the world. What’s the key to communication?

PS: Having a common goal, communicating value to somebody – that is the best part of technology delivery. I was a geography nut since I was a young kid and I love a good exchange.

Enjoying a good meal with people is one of the most important things. If you can eat and joke with each other the other things you have to talk about are easier to handle.