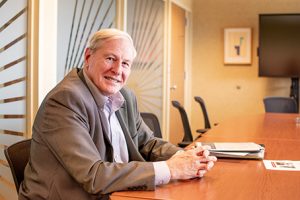 A drone-mounted detector could help defeat the dark legacy of land mines. And become a game changer in global security.

From the jungles of East Asia to poppy fields in Colombia, death sleeps a few inches beneath the ground.

Across the globe an estimated 110 million land mines await reckoning. A fraction will be detected and dispatched by professionals; many others will be triggered by unsuspecting civilians. Over the last 20 years, these weapons have claimed more than 112,000 casualties, roughly half of them children.

Prof. Kulcinski is a highly sought-after expert who has been leading nuclear fusion energy research at Madison since 1971. With respect to his present work on near term applications of fusion energy, people who have expressed interest and support include men who have walked on the moon, foreign diplomats, Defense Department officials and CEOs of U.S. industrial firms.

He says that detecting clandestine materials in war or peace is a costly and hazardous business. The Pentagon has spent over $19 billion on the problem, yet the leading method remains bomb-sniffing dogs.

The military’s interest is clear. Improvised explosive devices (IEDs), or so-called roadside bombs, burst into public awareness during the U.S. wars in Iraq and Afghanistan, accounting for half of American combat deaths.

Outside the theater of war, concealed explosives – land mines, IEDs, unexploded ordnance, smuggled nuclear material – pose a danger to ordinary civilians too, says Kulcinski. The next catastrophe could lurk in a suspicious backpack, or in any one of the world’s 4,700 stadiums, or among the scores of shipping containers unloaded daily at ports of entry.

With support from WARF Accelerator, a project underway in the basement of the Engineering Research building could make explosives detection faster and safer.

Working in their specialized lab, Kulcinski’s team is developing a fusion neutron generator that is compact and light enough to be flown on a drone. The key concept is that when the neutrons encounter explosives, which contain a high amount of nitrogen, readily detectable gamma rays are produced.

They call the system the Red Rover Project.

It could work like this: A drone carrying the proprietary neutron generator flies ahead of a convoy, receiving radiofrequency power from a Humvee or other mobile source. The generator uses this power to produce the neutrons that will induce telltale gamma signals if an explosive is present.

(The system could also include a relay drone to relay power in the event of hilly or complex city terrain.)

“We know that if we can generate 100 million neutrons per second with D-D [deuterium-deuterium] fusion, then we can detect explosives down to a meter below the surface,” Kulcinski says. “We’re demonstrating that.”

Moreover, the system may also be able to identify the type of explosive based on its unique chemical ‘fingerprint’ – useful information for whoever is sent to dispose of the explosive.

Support from WARF Accelerator is helping the team shrink the size of the neutron generator and show that it can detect an explosive in the laboratory. This validation will help the project attract additional partnerships and advance the Red Rover Project to the prototyping stage.

“All the physics have been solved,” Kulcinski says. “It’s the engineering that still has to be solved. That is, taking a 10 kilogram payload, a 10 kilowatt power source and a drone that flies six feet off the ground at several yards per second and put it all together.”

Kulcinski and two colleagues, Emeritus Research Professor John Santarius and Dennis Hall, a security expert, are currently refining a business plan and are in discussions with an industry collaborator in the Madison area. “We’re making alliances,” he says.

Interest is high because the potential security applications are countless.

“Say you want to scan the stadium in Green Bay, before the crowd comes, to see if anyone’s planted a bomb in a trash can,” says Kulcinski. “[With the new system] you could do it very quickly. The drone can fly around inside the stadium and check all the places where somebody might conceal something.”

Of course, fusion is a powerful muse (e.g., work temporarily slowed pending reconstruction of a four-foot-thick neutron shield wall needed to protect students and staff). In the course of a career spent exploring its power and potential, Prof. Kulcinski, emeritus now, has mentored more than 60 advanced-degree students.

Today, leading a project like Red Rover, the stakes seem higher than ever – maybe someone’s life or death.

“We have more ideas than we can solve,” Kulcinski says of his research enterprise. “It’s a problem that we deal with all the time.”