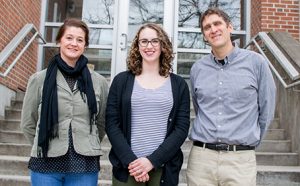 The Irish potato famine drove Katie Gold’s ancestors to America. Today, alongside Profs. Amanda Gevens and Phil Townsend, she looks to catch the culprit before it is too late.

In infamy, few crop diseases rival late blight. It starved one million people and displaced a million more when it ravaged Ireland’s potato fields in the 1840s. More recently, it struck Bangladesh.

“Late blight continues to be a significant problem in potato and tomato production globally,” says Amanda Gevens, associate professor and extension plant pathologist. “Wisconsin ranks third in the nation in potato production. Our growers are greatly concerned with the risk of late blight in their crop.”

“People still go hungry because of this disease,” adds Katie Gold, a Ph.D. candidate in plant pathology and master’s student in biometry.

Late blight is caused by the water mold Phytophthora infestans. It destroys the foliage above ground while degrading the tubers below. Highly contagious, it is also dreadfully efficient.

“If you get initial spores on a Friday and have rain all weekend, by Monday morning your field could be halfway destroyed,” Gold says.

With WARF Accelerator support, their team is advancing a new diagnostic approach capable of ‘seeing’ the disease earlier than ever before.

Their project employs hyperspectral imaging – measuring narrow wavelengths of light beyond the near infrared – to identify an infected plant before it develops symptoms visible to the human eye. 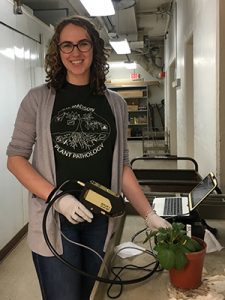 Gevens, who is co-interim director of the Seed Potato Certification program, has led efforts at competitively funding the project and supporting her student through funding and mentoring.

The third collaborator is Phil Townsend, professor of forest and wildlife ecology, who has contributed technical and analytical expertise as well as mentoring in remote sensing.

Together, the trio has driven the project to the cutting edge.

To explain, Townsend likens a diseased plant to a person with the flu. In both cases, the infection has already taken hold before the telltale symptoms manifest.

“The key is we are not detecting disease,” says Townsend, who directs the environmental spectroscopy lab on campus. “We are detecting what the disease is doing to the plant.”

By tracking these changes, they have developed computer models that describe how an infection unfolds through time.

And when it comes to treating crops, timing is everything.

“Early detection is a game-changer,” Gold says, because swift intervention can save a harvest. “Even just a couple days’ notice is a huge game-changer for growers.”

Gevens says that the inspiration for the project arose from these very growers, who know that an outbreak of late blight would be devastating to the state’s 64,000 acres of potatoes.

Over the last two years, the team has established proof-of-concept using handheld spectrometers on the ground level. When the disease pops up somewhere in the state, Gold hops in the car with Townsend’s crew to investigate (she calls this “tornado chasing”).

Their next phase is field validation. Their models will be put to the test this summer when a larger, full-range imaging spectrometer is mounted on an aircraft and flown over an infected field in Michigan. The instrument was funded by a UW2020 grant with WARF support, and is one of the few in the nation.

The trial will be conducted under highly regulated conditions. It will take place out of state because Wisconsin law prohibits field testing on late blight.

“Part of the validation is making sure there is no cross-diagnostic; that this is specific to late blight and not identifying some other disease response,” says Gevens.

Once refined, the data could be applied and deployed in several forms, such as software for drone-mounted field monitoring.

It wouldn’t be cheap or simple for a grower to use on his/her own, but the team can envision a contract-type service. Down the line, Gevens says that additional disease and crop information could be integrated in a comprehensive “potato health package.”

There is another major benefit to this work – it potentially takes human contamination out of the equation.

“When an inspector walks through a field you become a vector and create further spread,” says Gevens. “This technology could really advance our clean seed efforts.”

For Townsend, the strength of the project is its cross-disciplinary nature.

“This work is important for the people of Wisconsin,” he says. “It just makes sense that we come together to address these questions.”