New chemistry forged at UW-Madison could take the petroleum out of your paint—and change the economics of ethanol by dollars on the gallon. Let the scale-up begin. 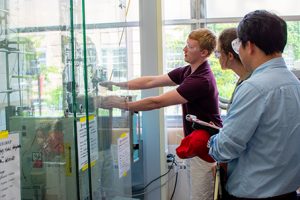 “When I describe what I do, I say I put dirt in a reactor, heat it up and flow liquid over it,” jokes Kevin Barnett.

It is a profound understatement for Barnett, a postdoctoral researcher in the visionary lab of Prof. George Huber (chemical and biological engineering).

Huber’s biofuel research group is pioneering the tools of a trade. Reactors, catalysts, computer models and imaging systems – a new generation of technology is needed to help the world kick its addiction to fossil fuels.

As their lab website notes, the petroleum industry has had more than 100 years to study and optimize its processes while biorefining “is only in its infancy.”

These high value chemicals (namely 1,4-butanediol, 1,5-pentanediol and 1,6-hexanediol) are currently derived from petroleum. They are widely used in paints, coatings, polymer resins, plasticizers, acrylates and adhesives – part of a $6 billion annual market, all told.

The new, three-step process was published last year in the journal ChemSusChem. It is six times cheaper than competing methods and exceeds 90 percent overall yields. By all measures it appears to outperform single-step processes, notes Kefeng Huang, a postdoctoral researcher.

The key to their approach: plant biomass naturally contains more oxygen than petroleum (about 40 percent by weight, compared to less than .1 percent). The new method exploits this to produce high value oxygenated commodity chemicals.

Huang, an expert in process design and modeling, explains that by eliminating expensive catalysts and difficult separations, their method is cost competitive at scale.

But will it scale up?

The team is confident it will since it is based on technologies that are commonly used in the petrochemical industry. They credit WARF Accelerator support with helping them de-risk at a critical juncture, and appreciate the market insights from program Catalysts Bill Banholzer and Patrick Sajbel.

Their next major milestone is to build a 10-times larger reactor, which equates to a 50-fold scale-up. By the end of phase I, they aim to produce gallon quantities of pentanediol – enough to approach industry for testing and validation.

These “real-world” customers could include paint and coating companies like PPG Industries and Sherwin Williams/Valspar.

The team’s optimism is founded. Commercial interest in bioderived commodity chemicals continues to surge. The diols swirling in Barnett’s vials are particularly attractive because of the high market prices they command ($2,700 – 6,000/MT in 2015 U.S. dollars).

But most importantly this innovation could, at long last, nudge biofuel economics. As noted in media coverage, these chemicals could serve as lucrative co-products of ethanol manufacturing.

“If we can integrate this process with ethanol fermentation, we can reduce the price of ethanol by more than $2 per gallon,” says Huang.

To make biofuels economical by producing them in synergy with chemicals – that is the field’s great challenge.

The answer will have implications far beyond the pump, to the vast stores of domestic biomass and the rural communities where it grows.

This project is a collaboration with UW-Madison engineering professors James Dumesic, Christos Maravelias and their groups.