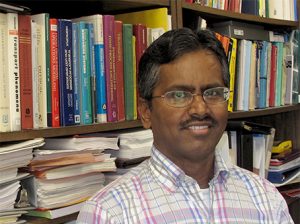 To see the world – or the supermarket aisle – through the eyes of a food engineer is an epiphany. Marshmallows become spring systems. Apples appear non-isotropic. A bag of Cheetos suddenly poses questions of viscosity, extrusion and tensile stress.

Fail to maintain proper mechanical strength and the Cheetos could turn to orange dust before they hit the shelves, says Sundaram Gunasekaran, a UW-Madison professor of biological systems engineering.

Gunasekaran draws an analogy between two classical processes: making bricks and baking bread. Both involve ratios, heat and chemical reactions. So why do we take one for granted?

“Consumers don’t realize engineering is involved and the problems are actually more challenging because many foods are alive and changing,” he says. “Concrete is concrete. Steel is steel. But cheese today is different from the cheese yesterday or tomorrow.”

Food has proven a rich problem space for Gunasekaran over the years, yielding numerous disclosures and partnerships with major industry players including Tyson and Intel.

But follow the breadcrumbs and they all lead back to his fascination with food quality and safety.

In his quiet office in the Agricultural Engineering building it is easy to forget that a crisis is brewing. The latest Salmonella outbreak has killed two people and sickened 300.

The numbers are expected to rise because this time the culprit is cucumbers, which are often sold individually and not labeled. There is almost no way for consumers to know if they’re eating a recalled variety, admits an FDA official.

The latest outbreak comes on the heels of several others linked to tainted ice cream, peanuts and cantaloupes.

And most incidents don’t make headlines. Every year an estimated 48 million Americans (that’s one in six of us) get sick from foodborne illness. Approximately 3,000 die.

The hazards are many. Gunasekaran knows that bacteria, toxins, allergens, pesticide residues and other pollutants pose a constant threat. He’s working on new biosensors to detect many of these contaminants. The technology is based on nanomaterials.

“Nanotechnology is rather slow coming to the food industry,” he says. “When we started working with these materials for quality and safety applications it was a major transition.”

He wants to empower everyone along the food chain to make good decisions.

“We can all agree on the idea of making it simple for a wide variety of people, whether it is the inspector or the mom feeding her baby at home,” he says. “They all care about safety and quality.”

He offers a few examples of the kinds of advancements he hopes to see some day – food packages with indicators that change color as the due date approaches or quality degrades; an easy food allergen test that works like today’s blood sugar monitors.

“Allergies are extremely dangerous, especially to children,” he says. “If a diabetic patient can draw blood and test it at home, there is no reason someone couldn’t put a food or juice sample on a test electrode to determine what is in it.”

Of course, these consumer-level applications will take time to unfold. And Gunasekaran has his work cut out for him, teaching classes when he’s not experimenting with new and improved nanosensors.

But is he a picky eater?

“I’m aware of what could go wrong,” he says. “So I tend to be careful. Not picky, but careful.”