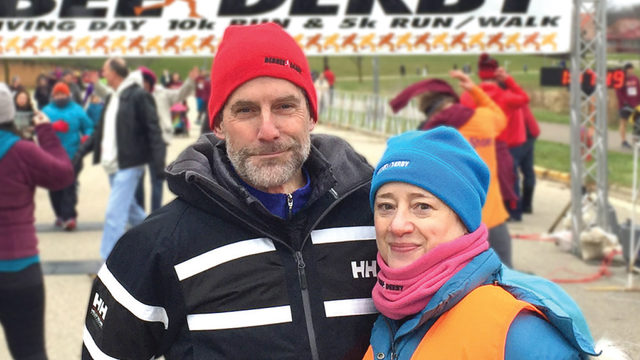 Forget turkey. And football. The best Thanksgiving Day tradition in Madison is the Berbee Derby. And thanks to founders Jim Berbee and Karen Walsh, this year marks the 15th year of the 5K and 10K run/walk in and around Fitchburg’s Research Park. The family-friendly event draws thousands of people and raises thousands of dollars for schools and nonprofits throughout greater Madison.

“Every dollar raised has gone back to the community, and I think that’s pretty unique,” says Jim Berbee. “We’ve had a goal from day one of both distributing money every year and also building a foundation for the future.”

As of late August, the Berbee Derby Technology Education Foundation has raised nearly $1.5 million and granted more than $670,000. Half of all proceeds go to charitable causes and the other half is invested in a permanent endowment fund, now worth more than $800,000, for future generations.

“It’s not just your kids but your grandchildren’s kids that are going to benefit from the work being done today,” says Berbee. “Essentially, it’s a gift forever.”

Pretty smart thinking, but Berbee is a pretty smart guy. He’s also humble, so I’ll keep his impressive bio short. After he sold Berbee Information Networks Corp. to CDW in 2006, Berbee earned a medical degree from Stanford, completed his residency in emergency medicine at University of Wisconsin Hospital and Clinics and now works in the emergency departments at the William S. Middleton Memorial Veterans Hospital in Shorewood Hills and Marshfield Medical Center–Rice Lake.

Through the BerbeeWalsh Foundation, he and his wife, Karen Walsh, support health and welfare projects. Berbee currently chairs the board of the Wisconsin Alumni Research Foundation, where he holds patents as part of a team developing a digital otoscope to better diagnose ear infections, especially in children, and reduce the use of antibiotics for such ailments.

“I’m cautiously optimistic that it will really make a difference in the clinical care of children,” he says.

In addition to all of that, he and Walsh are still very much involved in the Berbee Derby, which was conceived as a way to give back to the community.

“I remember clearly in 2003 I read a Wall Street Journal article on the rise in popularity of Thanksgiving Day runs,” says Berbee. “It’s a secular holiday, people have the day off and it’s great to get some exercise before wolfing down 5,000 calories and watching football. It had a lot of appeal.”

Berbee credits then-Berbee Information Networks Corp. president and CEO Paul Shain, who now holds the title of CEO at Singlewire Software, for the idea of creating a foundation to support tech education.

“That made all the sense in the world,” he says.

Berbee remembers worrying whether anyone would show up at the first race. They did — 1,000 participants, in fact. (More than 6,000 ran in each of the last two years.)

“At the time, we had an idea about what we’d like it to become, but I don’t think we understood the way the community would embrace it,” says Berbee. “What we learned is the real success of the race is all the families that come out. That’s really what makes the event what it is.”

CDW, a Fortune 500 technology solutions company, is still the major sponsor after all these years, and Berbee praises the company for being “incredibly generous with money and volunteers.”

“Madison is an amazingly generous place,” he says. “If you have a compelling story and promise good use of the resources, people are enormously generous.”

“I think a good idea in Madison gets funded,” he says.