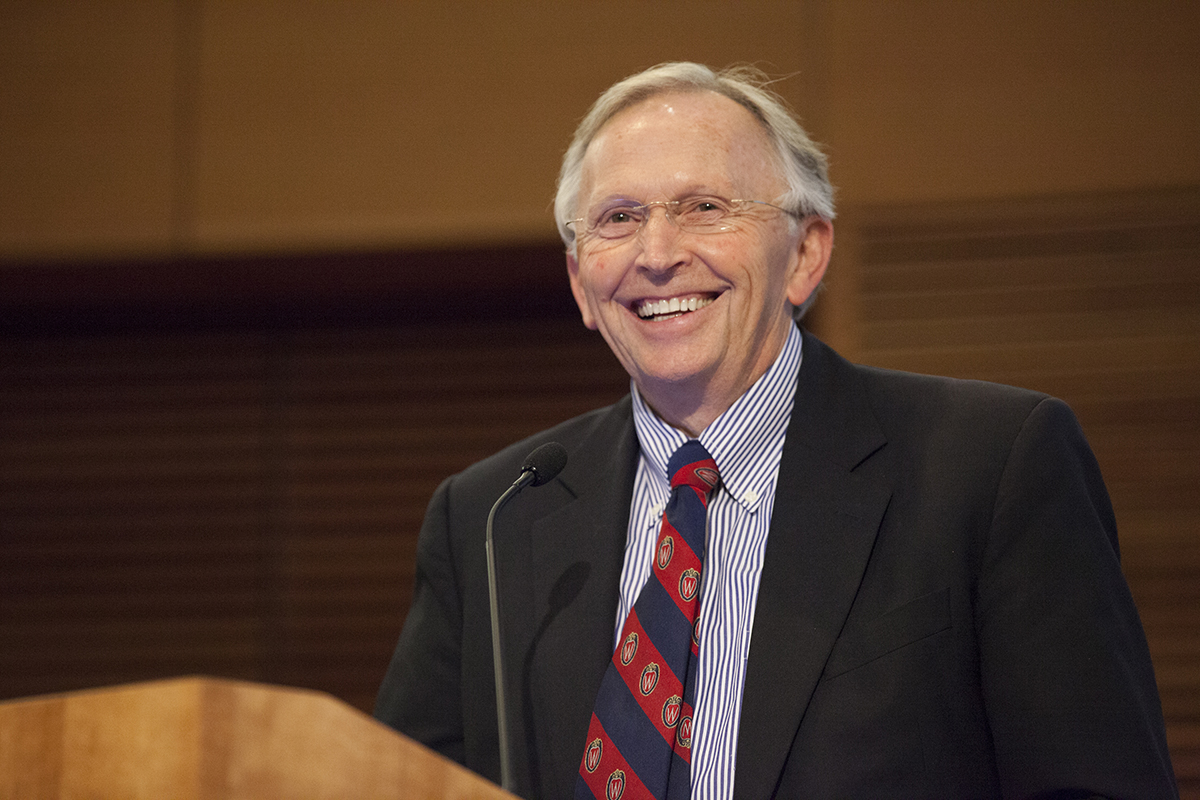 Carl Gulbrandsen, whose leadership and vision during his 16 years as Managing Director of the Wisconsin Alumni Research Foundation (WARF) resulted in unprecedented technological innovation and a doubling of the foundation’s investment portfolio to $2.6 billion, died October 17 after a lengthy illness.

“Our WARF family offers our deepest condolences to Carl’s wife Mary and his children Lars Gulbrandsen, Ellen Jalkut, Erik Gulbrandsen and their families,” said Erik Iverson, WARF’s CEO. “Carl’s legacy of commitment to advancing university research and bringing scientific solutions forward to benefit the world continues in our work today and always will.”

Under Gulbrandsen’s leadership, WARF – the independent nonprofit patenting and licensing organization for UW-Madison – more than tripled its annual support to the university from $43.0 million in fiscal year 2000 to $156.8 million in fiscal year 2016. When Gulbrandsen started as WARF’s Managing Director in 2000, WARF’s investment portfolio had a market value of $1.3 billion. When he left, that amount had doubled.

Gulbrandsen was steadfast in service to the university and state and played a strategic role in the formation of the WiCell Research Institute, a global leader in the banking, testing and distribution of stem cell lines. He also helped form the WiSys Technology Foundation, which provides patenting and licensing to other UW System campuses. He spearheaded WARF’s contribution to the public-private partnership that realized the creation of the Morgridge institute for Research, the Wisconsin Institute for Discovery and the Discovery Building that houses them.

Gulbrandsen shepherded significant research infrastructure investments including the BioStar Initiative, a collaboration between the state of Wisconsin, UW-Madison and WARF that funded construction of the Biotechnology Center, the Microbial Sciences Building and the DeLuca Biochemical Sciences Building.

“Carl has been one of the unsung heroes of higher education and especially of UW-Madison’s success; he always cherished what this campus does,” said Brad Schwartz, CEO of the Morgridge Institute for Research. “His hard work and influence can be seen across the university, from his helping UW and Morgridge scientists understand the intellectual property (IP) value of their work, to aggressively protecting that IP, to reinvesting in the next generation of great ideas and facilities. The Morgridge Institute would not exist without Carl’s guidance and vision.”

Prior to joining WARF in 1997 as patents and licensing director, Gulbrandsen served as general counsel for Lunar Corporation (now GE Lunar) in Madison from 1992 to 1997. He earned a Ph.D. in physiology from UW-Madison in 1978 and a J.D. from the UW-Madison School of Law in 1981. He received his bachelor’s degree from St. Olaf College in Minnesota. He had been a member of the Morgridge Board of Trustees since its inception, and its chair since 2020.

“Carl was a champion of entrepreneurship and a positive force in my life for years,” said Fred Robertson, Venture Partner for Baird Capital and Morgridge Institute trustee. “In 2005, when I was CEO of startup company TomoTherapy, I worked closely with Carl, who represented WARF’s investment in our company. I was really impressed with Carl’s passion and enthusiasm for our mission and his understanding of technology. Carl’s love for basic research was contagious — he sold me on the value of the Morgridge Institute, and I’ve been deeply engaged for the last 10 years. I am incredibly grateful for his influence.”

A memorial service will be held at Luther Memorial Church, 1021 University Ave., Madison, on Monday, October 24, 2022, at 11 a.m. A visitation will be held at church on Monday from 10 a.m. until the service. A memorial tribute and luncheon will follow at the Discovery Building at noon.