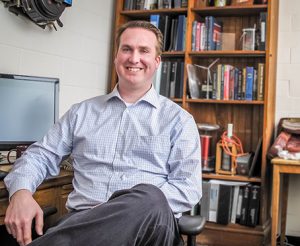 Entrepreneur and self-described “tinkerer” Dan Ludois is building the nuts and bolts of a revolution.

For being audaciously young, Dan Ludois has an appreciation for history.

In his office in Engineering Hall, a poster of Nikola Tesla broods beside a Ghostbusters-inspired proton pack. Antique batteries share shelf space with handmade prototypes of his inventions. Part of a motor he patented as a grad student sits next to one of Thomas Edison’s.

“For more than 100 years the basic recipe of electric motors hasn’t changed,” he explains. “It is a hunk of steel with copper coils inside. We’ve added rare earth magnets now, but the idea is the same.”

“My quest is to do a fundamental materials change in how we manage our electric power.”

Ludois’ war on conventional wisdom has taken several fronts. Most days find him on campus, teaching and running a lab as an assistant professor of electrical engineering. He’s also one of the brains behind a buzzy young startup called C-Motive Technologies, located on the east side of Madison next to the shuttered Oscar Mayer plant.

The common theme of his work is “capacitive” power conversion. In other words, harnessing nature’s electric fields to transfer electricity rather than running current through wires.

Ludois, who hails from small towns in southern Wisconsin, brings fresh eyes to old problems. His latest Accelerator project is a good illustration. His team is building a so-called integrated inductor/ capacitor. In essence, they are taking two fundamental electrical components and putting them together in the same volume.

It sounds deceptively simple, but no one has done it quite like Ludois. His design cuts size, weight and cost. And most interestingly, it streamlines production because both components can be manufactured simultaneously using existing techniques.

Originally, Ludois intended his device for battery pack boost converters in electric vehicles. But talks with industry have led him to pivot. He now believes the hottest market could be protective filters for use with state-of-the-art wide bandgap semiconductors.

“These new semiconductors are going to be at the heart of all major power conversion efforts from cars to wind power,” he says. “There has been a lot of focus from the Department of Energy.”

Ludois understands the road from idea to adoption is steep. Countless early-stage technologies have foundered in the “valley of death” between university and industry. WARF support can be something of a lifeline.

“The Accelerator Program is helping us close the gap,” he says. “We’re now into the fun part of the work. We know the concept is sound. We’re tweaking and adjusting and refining to get it into a form factor – a package that is attractive to a manufacturer.”

He’s no stranger to the private sector. In 2012, Ludois and two co-founders – all newly minted UW grads – launched C-Motive to continue pursuing their dream of super light, recyclable electric motors. No copper, steel or rare earth materials, which are an environmental nightmare.

The students had developed a pair of inventions on their own, independent of the UW. Looking for a “safety net” they elected to approach WARF.

“A piece of IP is only as good as your ability to enforce it,” Ludois has said.

“My personal view was that, even if we failed, at least our technology wouldn’t disappear into the ether. It would still be in the hands of someone who could potentially carry the licensing torch and go forward.”

Instead of failure they found a partner ready to help, and bagged a WARF Innovation Award in the process. They were off and running, starting out in a spare bedroom before stints in Sector67 and the MGE Innovation Center. C-Motive currently has five employees. Ludois has stayed involved with the company as chief science officer, even after accepting a faculty position at the university.

To Ludois, the Wisconsin Idea is more than a history lesson. He’s living it.

“I’m harnessing the fundamental brain power of the university to create something new,” he reflects. “I’m using my startup with all proper channels to take the idea and push it forward such that industry on local and global scales can adopt it.”