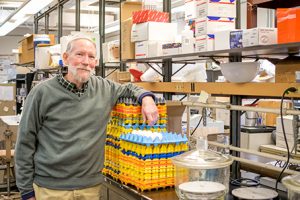 Ahead of the game

Campus spinout Ab E Discovery is set to smash business as usual. Founder Mark Cook reflects on his maverick reputation, and having job creation in his DNA.

Some of the biggest players in the meat industry are losing their appetite for the status quo.

Tyson Foods made headlines when it pledged to eliminate human antibiotics from its chickens this year. Wendy’s, Chick-fil-A and Taco Bell will follow suit; McDonald’s already made the change.

Part consumer demand and part cagey marketing, it’s a welcome trend for researchers like Mark Cook who are alarmed by the rise of drug-resistant pathogens in our food supply.

He believes it signals a sea change, considering that 70 percent of antibiotics in this country are used in farm animals. These are the same drugs used in human medicine.

But Cook, a UW-Madison animal scientist, isn’t crowing just yet. Cook runs one of the most entrepreneurial labs on campus. His group identified the market opportunity several years ago, and with support from the WARF Accelerator Program their prescience could be close to paying off.

Cook and collaborator Jordan Sand have received Accelerator support to advance the boldest alternative yet: a natural, drug-free method to protect poultry, pigs, dairy and beef cattle against common infections.

Their strategy turns the paradigm on its head: instead of trying to kill the “bugs” that cause disease, they are making animals’ guts smarter.

Through millions of years of evolution, many types of bacteria, parasites and other pathogens have learned to deceive their animal hosts. They flip a “switch” in the immune system (more precisely, a protein called Interleukin 10), telling it to stand down. Then they invade.

But Cook and Sand can prevent infection by removing the “switch.” They do this by feeding the animals antibodies that neutralize Interleukin 10. The antibodies are produced in eggs laid by vaccinated hens; those eggs are then added to feed.

“It is a lot more natural than any drug or antibiotic currently used in agriculture,” says Cook. “Think of all the chemicals we are replacing.”

The results are making a splash. Media report that in tests with 300,000 chickens, the new method provided full protection against a major farm blight called coccidiosis and necrotic enteritis. Experiments on bovine respiratory disease are just as exciting.

Cook says that Accelerator funding, as well as executive guidance from Catalyst Chris Salm and D2P staff, have been “vital.” The support has enabled them to scale up antibody production and answer key technical questions to the point where forming a startup made sense.

Their company, called Ab E Discovery, has licensed the technology from WARF and is marketing it to large-scale meat producers.

“Accelerator allowed us to move much farther down the path to commercialization, to incubate this on campus all the way up to our first purchase order,” says Cook.

He says that participating in the Discovery to Product (D2P) program on campus has been complementary, helping them de-risk the market for their bold new strategy.

A seasoned entrepreneur, Cook is something of a maverick on campus. Over the years he has spun four companies out of his lab. He’s a magnet for entrepreneurial students and postdocs, and relishes tapping their passion.

“We start with the end problem,” he explains. “We immediately look at the regulatory issues, cost analysis, manufacturing and supply needs – all of that is done before any idea is moved forward. I think that makes us unique.”

It’s an applied model well suited to the agricultural sector. It’s not for everyone but it comes naturally to Cook, the son of an oil and banking entrepreneur from southern Louisiana.

“I have always been interested in creating jobs,” he says. “It’s how I grew up. I saw my family create jobs and that intrigued me.”

His success is also the upshot of a staggering breadth of interests. Cook is already making strides in a second Accelerator-supported project directed at the aquaculture industry. That project is investigating how a poultry byproduct (dubbed “cosajaba oil”) can be used to promote growth and reduce mortality in high value fish species.

“We’ve identified the main market problem that we can solve and done the core experiments,” he says. “We’re pivoting as we go and Accelerator has given us the flexibility to do that.”

“We try to keep a pipeline,” he smiles.