The Wisconsin Alumni Research Foundation (WARF) is seeking commercial partners interested in developing a simple, rapid and reproducible assay for systemic inflammation.
Overview
The inflammatory response plays a role in illnesses from injury to infections to allergies.  Initiation of inflammation involves the activation of immune cells that trigger a cascade of events leading to phospholipase A2 (PLA2)-involved inflammatory processes.

PLA2s are enzymes that play a vital role in regulating the production of precursors to a number of pro-inflammatory lipid mediators, including prostaglandins, leukotrienes and platelet activating factor, which in turn exert a wide range of potent physiological effects.  Excess production of PLA2 is associated with diseases such as systemic inflammation, allergy, brain injury, cancer development and metastasis, and cardiovascular disorders. Studying the onset and severity of disorders associated with excess PLA2 could provide useful diagnostic information as well as information on the efficacy of anti-inflammatory therapies.

The Invention
UW-Madison researchers have developed a fluorescence assay for measuring phospholipase activity, including secretory PLA2 (sPLA2) activity.  This assay provides a simple, rapid and highly reproducible blood test that can be used to monitor systemic inflammation over an extended period and evaluate the effectiveness of anti-inflammatory therapies.

The sample can be compared to a control to determine if an individual has elevated PLA2 activity, which may indicate a disorder associated with systemic inflammation, such as sepsis, heart disease, cystic fibrosis or chronic obstructive pulmonary disease.  The assay also can be used to identify agents capable of altering phospholipase activity.

Because the activity of sPLA2 in serum is a critical marker for monitoring the onset and severity of systemic inflammation in patients with sepsis or heart disease, this assay also could be used to create a portable, bedside device for early detection of hyper-inflammation.  Such a device could provide accurate, real-time monitoring of changes in fluorescence intensity resulting from changes in sPLA2 activity and may enable early interventions for the prevention of multi-organ failure.
Applications
Key Benefits
Additional Information
For More Information About the Inventors
Publications
Tech Fields
For current licensing status, please contact Jennifer Gottwald at [javascript protected email address] or 608-960-9854
Figures 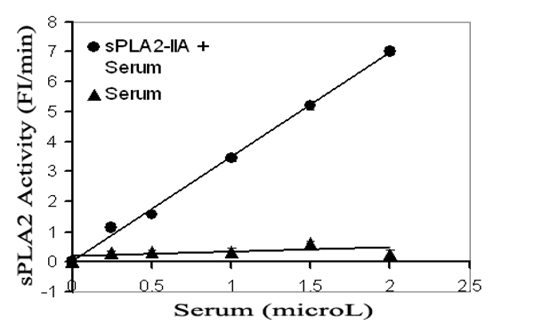 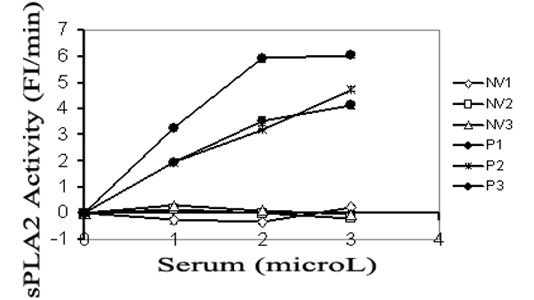