The Wisconsin Alumni Research Foundation (WARF) is seeking commercial partners interested in developing an improved laser ablation technique to manufacture precise nanoscale apertures in transparent substrate plates to improve patch clamping used for electrophysiology and drug screening.
Overview
Patch clamping is a well known method for measuring the flow of ions and molecules through ion channels imbedded in the cellular membrane.  The method employs micropipettes, or similar microscale apertures, to create a seal around an ion channel.  Quantitative observations then are made by measuring the extremely small quantum electrical changes across the cell membrane as a particular ion concentration varies, allowing deduction of the opening and closing of specific channels.  This technique is important in medical research and drug discovery because approximately 50 percent of all diseases affect the function of one or more ion channels.

In common clinical drug investigations the effects on various ion channels are determined by measuring electric signals produced by ion migration.  The extremely small magnitudes of the electric signals require an extremely high resistance seal between the pipette and the cell membrane on the order of 15 to 20 gigaohms, known as a “gigaseal.”  With respect to drug screening, a large number of ion channels must be measured, which prompts the need to produce plates with reliable and uniform pore arrays.  These plates could be used to measure multiple cells simultaneously and even be integrated into an automated process.

Current methods for fabricating nanoscale pores in a plate structure require expensive processes or produce inferior apertures that do not achieve a sufficient seal.  One current method utilizes heavy ion irradiation, such as gold, followed by chemical etching, as with hydrofluoric acid.  However, these latent track etching processes are too expensive for mass production of plates.  A second method uses a laser to burn a crater in a glass plate, but this process scatters molten glass and debris about the exit hole.  The debris around the exit hole impedes proper seal formation and thereby greatly reduces the resistance, generating a low yield of gigaseals, nearly 60 percent overall.

The Invention
UW-Madison researchers have developed an improved laser ablation technique to manufacture glass plates with an array of nanoscale apertures having smooth contact surfaces.  The method involves backing the plate substrate with a thermally expanding material that may either be a solid or a thin layer of liquid.  A first ablation period is used to burn a crater in the plate substrate that does not extend all the way through the material.  During the final stage of ablation the laser is applied in such a fashion that heat generates a shock wave in the thermally expanding substance, creating a smaller counter-facing concave crater in the plate substrate and completing the aperture.  Specific laser parameters also are controlled during the final stage of ablation such that etching via laser produces a smooth finish around the pore.

The improved method can be used to produce smooth pores less than 500 nanometers in diameter, making it ideal for production of patch clamp plate arrays.  The use of transparent substrates, such as glass, permits the use of both optical and electrical measurements of cell membranes.  With respect to the thin liquid layer method, the volatilizable substance provides a pressure wave to improve aperture formation and adjustment of the liquid layer thickness also permits precise control of the shock wave formation parameters.
Applications
Key Benefits
Stage of Development
The method has been proven to work, producing chips used in ion channel experimentation. Pores measuring 200 nm were “drilled” in glass. Further work is being conducted to optimize pore size and shape by varying laser intensity and fluids.
Tech Fields
For current licensing status, please contact Jennifer Gottwald at [javascript protected email address] or 608-960-9854
Figures 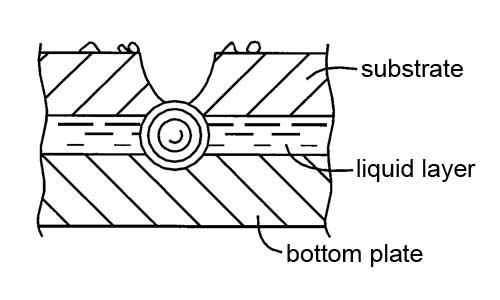