The Wisconsin Alumni Research Foundation (WARF) is seeking commercial partners interested in developing a two-axis pointing device for robotic wrist applications that uses only revolute joints, needs actuators only at the base, maintains a constant distance from the pointer to the pointing center and is non-singular.
Overview
Robotic systems have many industrial and research applications, such as in the automotive industry.  These robotic systems generally require six degrees of freedom (DOF), which can be broken up into three translational DOF and three rotational DOF.  The rotation can be divided further into one DOF of forearm rotation and two DOF of articulation of a two-axis wrist.  The simplest two–axis wrist is a universal joint, which has limited applicability as a robotic wrist because it locks at 90 degrees of deflection.  Therefore, the wrist needs remote actuation away from the base because of singularity, or the loss of a DOF.

Double universal joint (2UU) couplings and constant velocity (CV) couplings are two different classes of mechanisms that have been implemented to improve the performance of robotic systems.  2UU couplings consist of two universal joints connected in parallel.  The major problem with 2UU couplings is that individual serial chains apply the same constraints to wrist movement, making the coupling overconstrained.  CV couplings are not overconstrained like 2UU couplings, but require three different actuators at the base.  Because one of these actuators is redundant, CV couplings often are called "overactuated."

The Invention
A UW-Madison researcher has developed a two-axis pointing device for robotic wrist applications that uses only revolute joints, needs actuators only at the base, maintains a constant distance from the pointer to the pointing center and is non-singular.  The wrist consists of the parallel combination of a revolute-spherical-revolute (R-S-R) linkage and a revolute-universal (R-U) linkage.  With only these revolute linkages, the wrist is never overconstrained.  Actuation is required only at the base of the R-joints for each linkage, which keeps the device from being overactuated.  Locking is eliminated by maintaining spherical motion while the distance between the pointer and pointing center are held constant, as opposed to linkages that require that distance to vary.  Non-singularity provides constant velocity motion through 180 degrees of deflection in any direction by orienting the R-U linkage transversely with respect to the R-S-R linkage.
Applications
Key Benefits
Tech Fields
For current licensing status, please contact Emily Bauer at [javascript protected email address] or 608-960-9842
Figures 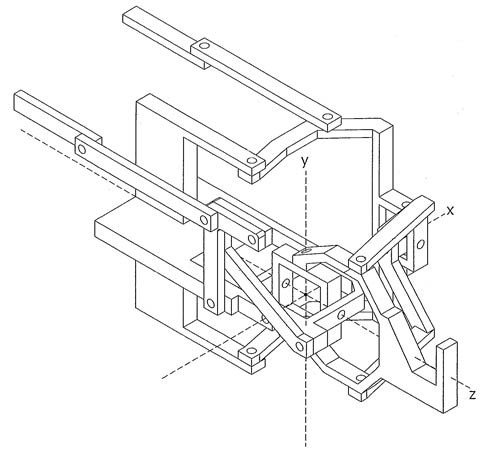