Producing Olefins for Use in Gasoline, Jet and Diesel Fuels from Chemicals Obtained from Levulinic Acid
WARF: P100099US01

The Wisconsin Alumni Research Foundation (WARF) is seeking commercial partners interested in developing a process and apparatus to produce hydrocarbons from aqueous solutions of lactones, hydroxyl-carboxylic acids, alkene-carboxylic acids or alcohols.
Overview
Levulinic acid is a biomass-derived compound that can be obtained inexpensively in high yields from waste cellulose-containing materials. It has been identified as a top biomass-derived chemical due to its ease of production for both five and six carbon sugars and its useful functional groups, a ketone and a carboxylic acid. Levulinic acid can be used to form other, more valuable chemicals including gamma-valerolactone (GVL).

GVL is valuable as a renewable platform molecule with potential in developing both renewable energy and chemicals. GVL retains high energy content and performs comparably to ethanol as a fuel blending agent. However, characteristics such as high water solubility, blending limits for use in conventional combustion engines and lower energy density compared to petroleum-derived fuels have limited the use of GVL in the transportation sector. Therefore, a method is needed to convert lactones such as GVL into liquid alkenes or alkanes with molecular weights targeted for direct use in transportation.

The Invention
UW-Madison researchers have developed a method and apparatus for producing olefins (unsaturated hydrocarbons) in the C8 to C16 range from GVL. The method involves two tubular flow reactors and an inter-stage separator in a single catalytic system. The chemical transformation proceeds via conversion of GVL to an n-butene, which is then introduced into a second reactor where the butene is converted via acid catalyzed oligomerization to higher molecular weight olefins (C8 and longer). High pressure CO2 is an additional by-product of the reaction. 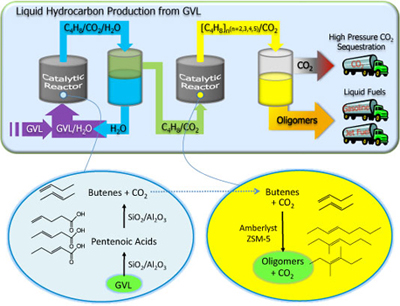 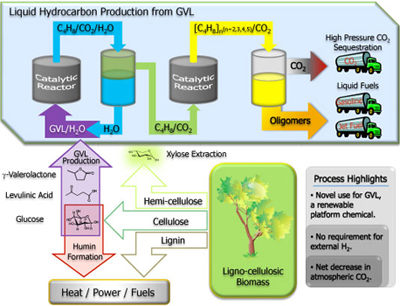 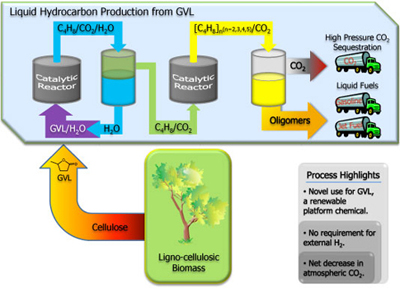