The Wisconsin Alumni Research Foundation (WARF) is seeking commercial partners interested in developing a Braille watch to provide the visually impaired with an improved method of reading time.
Overview
The Braille language is the universally accepted form of written communication for the visually impaired. A system of dots, arranged in a three row by two column grid, is used to display different letters, numbers and symbols. Although the Braille system provides millions of visually impaired individuals with a method for reading and writing, a device that allows the time to be read in Braille has not yet been developed. Currently, talking or tactile watches are used to tell the time. However, talking watches can be disruptive in quiet settings and draw attention to the user. Tactile watches are silent, but they are difficult to read and can be easily broken or damaged. A new time-telling method for the visually impaired is needed.
The Invention
UW–Madison researchers have developed a Braille watch to provide the visually impaired with an alternative way to read time. The watch uses small pins to display the time in standard-sized Braille numbers. These pins are seated upon a disk (four pins per disk) with raised and lowered surfaces. When the disk rotates, the pins are translated up or down to reflect a change for each Braille digit and the corresponding time.

One embodiment of the watch comprises a microprocessor, a computer-readable medium, a time display application, a plurality of actuators and one or more buttons to change the mode (hours-minutes, minutes-seconds or month-day). One actuator rotates each disk to adjust the display.

A second embodiment of the watch comprises a single actuator, a plurality of disks, a plurality of pins associated with each disk and an additional pin to indicate a.m./p.m. The disks are linked through one or more gear arms and a plurality of gear teeth, each of which rotates 360 degrees. The actuator controls rotation of the first disk, which in turn controls the rotation of the second disk, etc. The actuator rotates at a constant angular velocity and the system displays the time similarly to the previous embodiment. A third, similar embodiment also is provided; however, it also includes a drive gear that is controlled by the actuator to control the rotation of disk one. These embodiments function similarly to a standard watch, but display the time in standard Braille (depicted in the figure below). 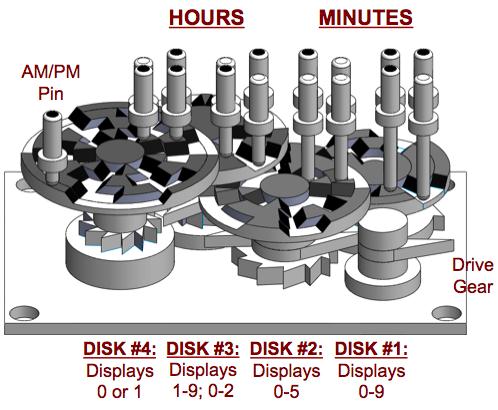