The Wisconsin Alumni Research Foundation (WARF) is seeking commercial partners interested in developing an improved method of lithography utilizing self-assembling block copolymers to increase nanoscale feature density on a substrate surface.
Overview
The creation and replication of nanoscale patterns is becoming increasingly important for the development of new electromechanical, chemical and biological devices at the micro- and nanoscale.  For example, the integrated circuit industry relies on optical lithography to etch complex circuit patterns onto silicon wafers.  However, the resolution of conventional lithographic techniques is limited by the wavelength of radiation.  Even advanced lithographic techniques such as deep ultraviolet or liquid immersion are not able to attain resolution below about 30 nanometers.

Other approaches, such as electron or ion beam lithography, are uneconomical for large scale implementation for several reasons including long etching times and high energy requirements.  Therefore, these more expensive techniques are reserved for lithographic mask fabrication, which subsequently can be used to pattern circuits.  The ability to easily create patterns smaller than is possible using modern photolithographic methods, on the scale of tens of nanometers and below, will facilitate commercial manufacture of nanodevices and promote their integration into industry as well as the consumer marketplace.

UW–Madison researchers have previously developed an improved method of creating and transferring chemical or physical nanoscale patterns using block copolymers (see WARF reference number P08196US).  The method can be used to rapidly and easily generate chemical or physical patterns to be employed in all fields of nanotechnology.

The Invention
UW–Madison researchers now have developed an improved method to create dense, uniform nanoscale patterns via integration of lithographic techniques and self-assembling block copolymer technology.  The method involves chemical patterning, for example by electron-beam lithography, to activate desired regions on a substrate.  Then a block copolymer film possessing a specific structure and composition is deposited on the patterned substrate.  Upon perturbation of the system, microphase separation of copolymer domains becomes thermodynamically favorable, which generates a second pattern comprising the constituents of the original block copolymer.

The second pattern may have greater density and resolution than the first pattern, depending on the particular block copolymer and desired pattern.  In certain applications of the improved method, density can be increased by a factor of four, resolution can be doubled and superior pattern uniformity can be achieved.

When employed with other chemical etching techniques, the improved patterning method can be used to fabricate a substrate possessing one to seven trillion features per square inch with a deviation less than one nanometer from ideal placement.  The features patterned on the substrate may include cylinders parallel or perpendicular to the surface, hemispheres or rows.  These techniques could be used to manufacture hard drives or similar disk storage systems that could hold much more information per unit area than surfaces prepared by traditional lithographic methods.
Applications
Key Benefits
Additional Information
Related Technologies
Publications
Tech Fields
For current licensing status, please contact Emily Bauer at [javascript protected email address] or 608-960-9842
Figures 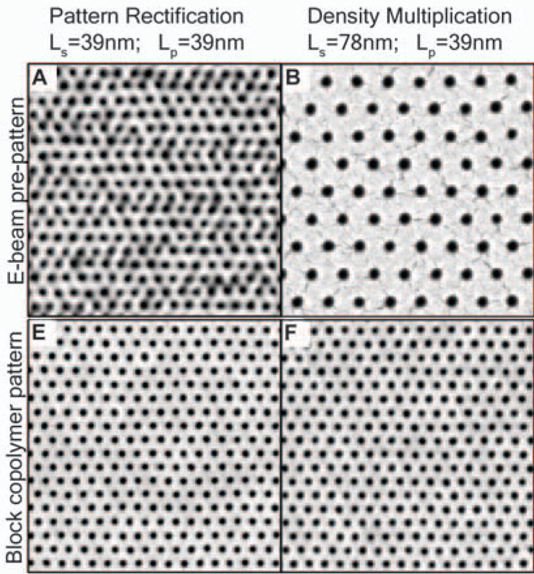