The Wisconsin Alumni Research Foundation (WARF) is seeking commercial partners interested in developing a new type of sensor for use in a mass spectrometer.
Overview
Mass spectrometry is a highly selective and quantitative technique that is widely used to determine the chemical composition of a sample. Applications of this analytical tool include measuring isotope ratios, characterizing proteins, determining how the body metabolizes pharmaceuticals and analyzing gases.

Mass spectrometry involves several steps. First, the atoms of interest are ionized by removing one or more electrons to form positive ions. Then the ions are accelerated so they all have the same kinetic energy. The ions are deflected by a magnetic field according to their mass, and the beam of ions is electrically detected.

The Invention
UW-Madison researchers have developed a new type of sensor for use in a mass spectrometer. Because this sensor does not require the molecule of interest to generate a secondary electron for detection, it avoids the size limit and is capable of detecting larger molecules with more sensitivity than currently available technology.

This device consists of a thin membrane with nano-electromechanical systems (NEMS) pillar resonators distributed in an array fashion on its inner surface. The membrane is set in motion to cause the pillar resonators to vibrate. The vibrational state of these pillars controls the spatial distribution of the electrons that are emitted. Then the molecule of interest interacts with the receiving surface of the membrane, changing the resonance frequency of at least one pillar and altering the electron emission. To sense the molecule, this change can be detected using a fluorescent film or other method.
Applications
Key Benefits
Stage of Development
The development of this technology was supported by WARF Accelerator. WARF Accelerator selects WARF's most commercially promising technologies and provides expert assistance and funding to enable achievement of commercially significant milestones. WARF believes that these technologies are especially attractive opportunities for licensing.
Additional Information
For More Information About the Inventors
Tech Fields
For current licensing status, please contact Jennifer Gottwald at [javascript protected email address] or 608-960-9854
Figures 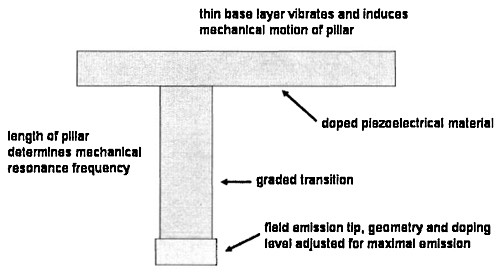